skip to main | skip to sidebar

So it's about time we started our tour diary, 11 days in now so about time! But to be fair I think we needed that time to figure out what's been going on around in order to be able to explain it coherently.

We've finally got bit of time off that isn't spent driving in the van furiously from country to country and being savaged by swiss border patrol. We're in a hotel in bavaria, right next to an awesome castle that I've wanted to see for years cos it looks so fucking rad. Tomorrow it will be done.

Amsterdam
Quite a journey to even make this! Having been literally run out of Calais by screaming racists hitting our van, Amsterdam was a few hours away. And being the fresh faced idiots we are, turning up with a few amps and a pair of pants, what was to follow was a bit of a surprise. The heineken music hall is a 5500 capacity uber-hall, so the usual conversation on arrival of 'where do we load in' was greeted with the entire wall of the venue sliding away and us being told to actually drive into the hall with the van. And getting in, the van seemed like a small toy, dwarved by the stage and truckloads of kit belonging to Dimmu Borgir and Korn. The entire contents of our van spilled out were about the same size as one rolling riser, and the forklift truck being used to get anything up onto the stage was really struggling to find anywhere on our stuff to stick its prongs without it slipping through! I found some shitty wooden pallet to put drums on, much to the amusement of the locals. I thought it would make a pretty wicked drum riser actually. And all this while actual Korn were soundchecking in front of us.
If it wasn't for our soundman and tour manager Ben, we'd be in the total shit, but thanks to him, everything went like absolute clockwork and before we knew what was going on, all the crew knew who we were and were running around for us while we set up on stage and started line checking. With precision timing, at least 3000 kids ran in from all sides and squeezed into the front barrier with eager faces on them. Thank Fuck! They are gonna love what we're about to shit in their faces and smear all over their rosy cheeks…

Zurich
Luckily we had a few days off to get over the whole shock to the system of such a serious production set-up and the fact that we were actually a part of it. And we were getting away with it! But we quickly got around to the swiss gig, in a much more intimate theatre in Zurich. Again, easy entrance, van parking and catering all considered, we were starting to feel more at home with the arrangements. A few technical difficulties with the local crew went flying by and didn't stop our shower of acoustic turd from being slung over a few thousand more unsuspecting metallers. Watched the whole Korn set from the side of the stage this time, just thinking of the day I bought their first album something like 15 years ago. Awesomeness.
By now we've also been getting on so well with the Dimmu Borgir team that they managed to get us on to open at their own headline shows in Milan and Luxembourg! Right, time to get the fuck out of Switzerland to somewhere that has normal sockets to plug things in and takes euros!

Munich
Luckily managed to avoid the whole camping scenario that was booked in and rapidly approaching. Due to Octotberfest, all accommodation was taken, but a few inside leads got us an awesome hotel in the outskirts. With that sorted, time to check the venue out. It's called Zenith Kulturhalle I think, basically a massive converted warehouse done out all industrial and gnarly. Another enormous place like Amsterdam, the network of dressing rooms and offices was almost as impressive.
The shows so far have been pretty easy as far as playing to that many people goes, maybe the past festivals we've played have helped us, or maybe we're just totally awesome dudes.

Vienna
Continuing the theme of awesome industrial venues, this one is a huge brick gas works, 4 massive round towers converted into a city of apartments shops and clubs. Reliably informed by Ben of the phat PA and sub set-up, things look to be very loud tonight, confirmed by the security guards covering their ears and grimacing during sound check.

Milan
Much more scary, this one is a Dimmu Borgir headline show so more black metallers line the streets than the average 2 or 3 in your local high street. Main support was from doom kings Triptykon. It was really nice to see Dimmu's own crowd and they were just as welcoming of us as the Korn crowd, us being the weird non-black wearing rock and rollers that spout shit onto peoples' faces.
Not only facing the joys of satnav not playing in Italy and accidentally finding ourselves in pure ghetto hell by using wrong directions, and then finding our hotel booking had been wiped, we did eventually find ourselves with a bed in a strange James Bond themed hotel. 4 star my arse though. 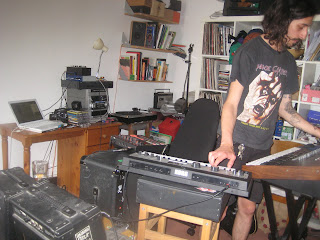 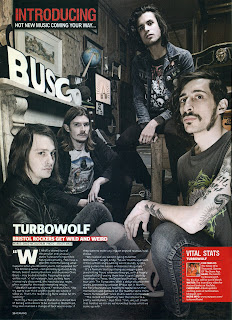 Kerrang! has shone down from the heavens upon our swamp of noise and written some rather lovely words about us. Thank you kind K! people for sticking us in there and showing us your almighty love. Get it this week or forever hold your £2.20 and sob until you turn green and die. Here's the interview that's featured within just in case your eyes have exploded with excitement and you can only read with your mind...

"We have a shared love of the peculiar and unusual," states Turbowolf singer Chris Georgiadis proudly. "We have a scientific thirst for seeing what happens when you do what you're not supposed to!"
The Bristol quartet - completed by guitarist Andy Ghosh, bassist Jeremy Dunham and drummer Chris Davis - may be dedicated to flipping the script on the rock 'n' roll rulebook, but, as they have increasingly discovered, the least obvious route, often makes for the most interesting results.
"We don't pander to anyone," reckons Chris. "We try not to over think anything and see where it takes us. That's the real driving force and so far it's working."
Forming a few years back thanks to a shared love of Danzig and a desire to be as loud as Motorhead, they soon realised a change or tack was in order if they to make any impact beyond raucous local shows.
"We realised we weren't going to better Motorhead," laughs Andy. "So we tried to approach it from a fresh angle adding weird sounds, synths, using guitars like basses and basses like guitars."
It's a formula that's got tongues wagging and jaws hitting floors wherever they go, with a hugely successful 2009 seeing them tear it up at South By Southwest in Texas, The Download festival, and on tour with The Computers. With a debut album in the works, preceded by a teaser EP due out in March, the fiery foursome are hoping to capitalise on that momentum and get back on the road for some more "beers for breakfast" once studio work is completed.
"The record will hopefully take the listener to a pretty weird place," says Chris. "Live, we just smash it as hard we can so we're excited to see what we come up with."
Posted by Turbowolf at 09:28 2 comments:

So it's time to lay down our debut album. We're all pumped, been working out every second of the day to look like how we feel. Looking to get most of it down before Xmas and do a bit more in new year. We're recording it in Bristol, at our favourite haunt, Bink Bonk. We were visited us in our dreams by 4... Fangs of the Serpent, doom changes his flesh, the approaching battle, gold is the the dream of the Alchemist and mortal men.

So thats whats up right now. Looking forward to touring the Album in new year and seeing your faces. If you can't wait that long then check out our myspace for gig dates and fresh hot whimsical melodies.

Wolves
Posted by Turbowolf at 05:33 No comments:

This is our Thrash Hits interview with the most excellent Hugh just after we played at Download '09. We had an awesome time playing and meeting Phil Anselmo and Rex from Down was by far the highlight...well apart from our Thrash Hits interview of course, oh yea and playing in front of almost 2,000 people felt pretty good too...and the food wasn't bad either actually and the free beer and whiskey went down well...basically it was all good. We filmed some nonsense too which we'll put up at some point. Until then, heres us on Thrash Hits!!!!!!

x Wolves x
Posted by Turbowolf at 08:49 No comments:

Yes! Our new single is out today! It's called Read And Write and you can get it as a download or as a limited edition 7" from places like HMV and beyond. The B side is called Seven Severed Heads and is a mass of fury and destruction for your listening pleasure. You can GET IT here... http://hmv.com/hmvweb/displayProductDetails.do?ctx=281;1;-1;-1;-1&sku=987206

And... Our Maida Vale live session for Rob Da Bank has just been on Radio 1! We played 3 tracks faster than ever, Ancient Snake, Read And Write and Let's Die. Click on link to listen again!

Thanks to everyone who came to see us at Download this weekend, we had an awesome time.

x Wolves x
Posted by Turbowolf at 05:54 No comments: 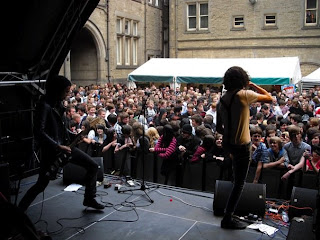 Thanks to everyone who came down to see us in Middlesbrough. Heres a little onstage video for your delectation...

x wolves x
Posted by Turbowolf at 04:31 No comments: